The characteristics of the discharge must be fully described and the completed application form must be accompanied by scaled drawings showing the layout of the premises, the drainage systems (foul and storm) and the point of discharge. A prescribed fee must be paid. In the case of a discharge to waters, a notice must first be published in a newspaper circulating in the functional area of the local authority and a copy of the notice attached to the application form. The local authority/Irish Water must make a decision within two months unless it requires further information or clarification.

If the local authority/Irish Water decides to grant a licence it must be carefully examined on receipt as there are many cases on record where conditions imposed were impractical, unreasonable or prohibitively expensive to implement. The only means by which changes can be made is through an appeal to An Bord Pleanála within one month from the date of grant (or refusal). In the case of a discharge to waters, third parties may appeal. It is vital to realise that An Bord Pleanála adopts a very strict policy with regard to statutorily defined time periods.

The costs incurred by Irish Water in treating a discharge to a sewer may also be recharged to the discharger. The charges are normally based on the volume of wastewater and the concentration of pollutants such as suspended solids and biochemical oxygen demand (BOD) present in the wastewater.

When is a licence needed ?

Sometimes there is confusion as to what is wastewater or effluent and whether a licence is needed or not. The Water Pollution Act (1977) defined a ‘trade effluent’ as an effluent,

“which is discharged from premises used for carrying on any trade or industry (including mining) but does not include domestic sewage or storm water”. All ‘trade effluents’ must be licensed.

Discharges of domestic-type wastewater (sewage) from commercial and industrial premises to municipal sewers is generally not subject to licence but a licence would be required if the discharge was to a surface water. A licence is not required for domestic sewage not exceeding a volume of 5m3 in any period of 24 hours that is discharged to an aquifer from a septic tank or other disposal unit by means of a percolation area, soakage pit or other method. A licence is required for discharge of domestic sewage from a septic tank where the discharge is direct to surface waters and, in all cases where the discharge exceeds 5m3 in 24 hours. Many industrial processes do not generate ‘process wastewater’ or effluent but there may be uncontaminated cooling water. This is regarded as wastewater since it is often hot and usually contains various treatment chemical additives and so a licence is required. The same applies to boiler blowdown and the discharge from any water treatment plant used to treat the boiler make-up water.

In general, licences are not granted for discharges of uncontaminated storm water (rain water) to either municipal sewers or watercourses since such discharges are non-polluting. However, it may be decided that storm water from paved areas where there is a risk of pollution (e.g., loading or unloading of liquid materials or chemical substances) should be licensed

Where “a material change” in a process has taken place or if a new process has been introduced, and the resulting wastewater discharge has changed, then any existing licence must be reviewed and, if necessary, a revised licence obtained. This is a formal process similar to making the original application. Local authorities/Irish Water themselves may initiate a review particularly if new water quality standards have been specified in national or EU regulations.

The Water Framework Directive (2000/60/EC) is a European Union law which aims to protect and improve the quality of all waters throughout the European Union. The core reason for the Water Framework Directive was that while there were many directives dealing with water quality, the fact remained that there was little or no integration and no overall coordinated policy for sustainable management of the resource. Furthermore, it was argued by some that despite all the directives, water quality was not improving and in some areas was actually deteriorating. The scope of the directive includes inland surface waters, coastal waters, transitional waters and groundwater. The latter is significant as it recognises the link between surface water and groundwater and how the quality of one often affects the other.

The key objectives of the Directive are to:

The WFD has been transposed into Irish law by means of five main Regulations:

These Regulations require all public authorities to take measures appropriate to their functions to promote or achieve the implementation of this directive. At national level the Department of the Environment, Community and Local Government (DECLG) has delegated the task of national coordination of all the technical aspects of the WFD to the Environmental Protection Agency (EPA), while retaining ownership of the economic and policy aspects of the Directive.

The basic means by which the core aims are to be achieved is by the River Basin District (RBD) concept and the development of a strategic management plan for each district. A district may contain more than one river basin. 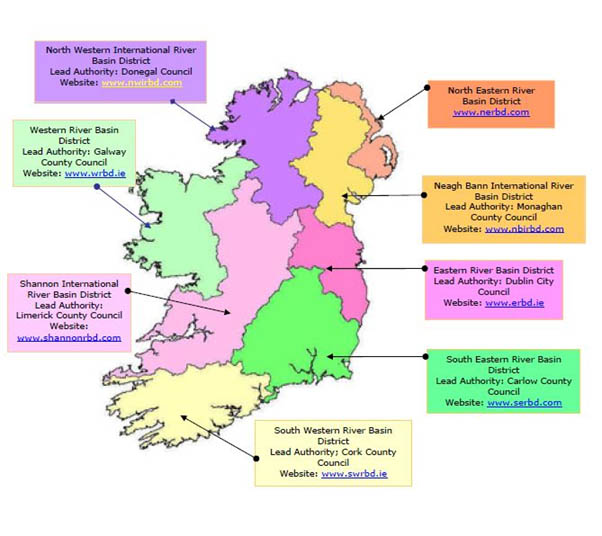 A total of eight RBDs have been established in relation to the island of Ireland. They are as follows;

Time Frame for Implementation of the Water Framework Directive

This guidance note should not be considered as a legal document nor does it purport to provide legal advice on Water Pollution Control Legislation. In many situations it may be necessary to seek expert advice and assistance.