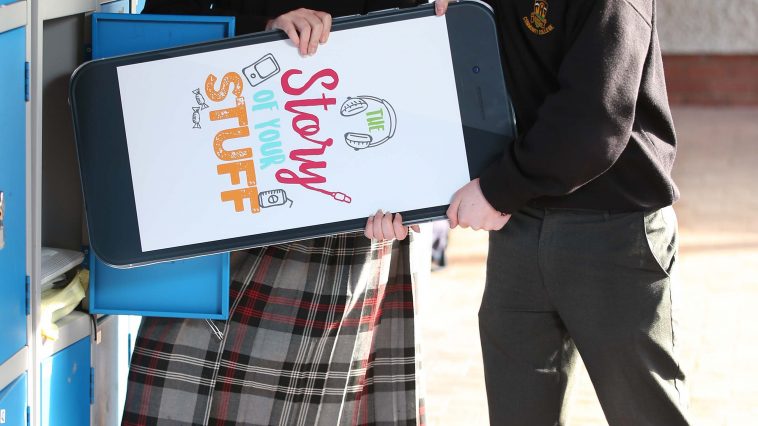 ‘Our Teenagers Tell Great Stories’, says the EPA. The Story of Your Stuff winners announced.

The EPA has announced the winner of The Story of Your Stuff competition. Iga Manulak and Emma Jackson, students at St. Mary’s College, Ballysadare, Co. Sligo, wowed the judges with their entry. Natural resources are finite and their winning entry showed that we need to be thoughtful in relation to everything we consume.

The EPA created The Story of Your Stuff competition and encouraged students to conduct their research through the Irelands environment web resource. Campaign ambassador, photographer and music video director Christian Tierney provided video-making tips to students on the campaign website External linkwww.thestoryofyourstuff.ie. He also inspired potential entrants with his own Story of Your Stuff video production. Students were invited to choose an everyday object and use a visual medium to illustrate its lifecycle – where it came from, how it was used in its lifetime and more importantly, where it was going to end up.

Speaking about the winning submission Christian Tierney said, “The winning entry is amazing with some beautiful shots. The story is told in a very creative and inspiring way.”

The winning video told the story of a pencil, illustrating the pencil’s journey from a tree in Brazil to a compost bin in Ireland and everything in between. The captivating video had some strong competition with over 100 entries received from secondary school students across Ireland.

Fellow judge of the competition, the EPA’s Helen Bruen said,“We were bowled over by the level of research, skill, time and effort that went into each project. From our point of view, each entry is a winner if the students who took part learned something from their experience that makes them think a little more carefully about the environment, consumption behaviours and about how to use and dispose of their stuff in a sustainable way.”

Speaking about the winning entry, The Story of Your Stuff judge and Producer of RTE TV’s Eco Eye Marcus Stewart said,

“The winning video demonstrated brilliant artistry and creativity in delivering the message that all the products we use, even something as simple as a pencil, are sourced from materials all over the world. The video promotes the idea that these items should be respected during their full lifecycle and disposal. The film perfectly blends visual artistry with text and music to deliver a perfectly paced film that builds through the lifecycle of the forgotten pencil. The creators Iga Manulak and Emma Jackson are natural artists and film makers.”

The winning students and their school will receive competition prizes. In addition, the school will get to enjoy a video workshop with Christian Tierney.

All information about the winning video and those that were highly commended can be viewed at www.thestoryofyourstuff.ie