The NSAI has today published its 2016 Annual Report (pdf), which reveals that 1,012 organisations are certified by NSAI to key business management standards. Many of these carefully-designed standards are linked to European Directives, which create a level playing field for trade within the EU. Last year alone 201 new business excellence certificates were issued by NSAI to 113 organisations. 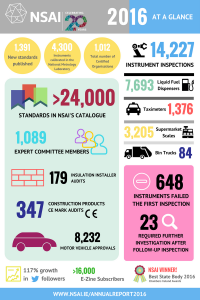 Commenting on the report the Tánaiste and Minister for Enterprise and Innovation said:

“Irish businesses that use international standards will be best positioned to react, evolve and compete in a post Brexit world. The investment in standards is a crucial one for companies who wish to excel and compete on the international stage. As the Brexit negotiation process continues, Irish businesses could utilise the extra certainty provided by key standards, giving themselves a competitive edge at a time when new challenges and opportunities are arising.”

“Observing the highest of standards is crucial for businesses in today’s fast-paced, competitive and highly-globalised marketplace. The role of NSAI in facilitating the development of standards and supporting businesses is an extremely important one. Through its standards development committees, NSAI gives entrepreneurs and technical experts the opportunity to have their say on the evolution of their sector, and to feed into international committees”.

As Brexit negotiations continue, NSAI’s Chief Executive Geraldine Larkin is warning that the reintroduction of technical barriers between Ireland and the UK could have a negative impact on trade and operating costs for some Irish SMEs.

“Standards embody the best practice put together by technical experts to create a uniform engineering or technical criteria.  They are international and many are mandatory, so we welcome the commitment by our counterparts in the BSI to stay within the existing standards framework,” said Ms Larkin.

“This means that those organisations who already certified by NSAI to key international business standards, like ISO 9001 Quality Management Systems and ISO 14001 for Environmental Management Systems, are better-positioned to take on the challenges of Brexit in the months and years ahead” she added.

According to the NSAI’s 2016 Annual Report, the ISO 9001 standard for Quality Management Systems was the most popular standard sold by NSAI in 2016. It is one of two major standards being updated by the International Organization for Standardization (ISO), the other being ISO 14001 for Environmental Management Systems.

Irish businesses are ahead of their European counterparts in moving to the latest versions of ISO 9001 and ISO 14001, with one-in-four organisations certified by NSAI already upgraded ahead of the September 2018 deadline.  It follows on from NSAI’s 16 free information seminars, run nationwide last year and attended by 1,300 people.

The 2016 Annual Report shows that the NSAI standards catalogue has expanded to over 24,000 publications, with the addition of 1,391 carefully-designed guidelines and requirements last year, which help organisations innovate and compete on the global market.

The number of people choosing to help shape the standards of the future online also increased by 21%, with 2,134 people now registered to NSAI’s ‘Your Standards, Your Say’ online portal.  While more than 1,000 people continued to participate in NSAI’s standards committees at home and abroad during 2016.

Motor vehicle approvals granted during the past year rose 15 per cent to 8,232.  NSAI issued 5,661 national and 2,571 European automotive approvals for vehicles, their components and systems in 2016, focusing on issues such as emissions, engine power, tyres and seat belts.