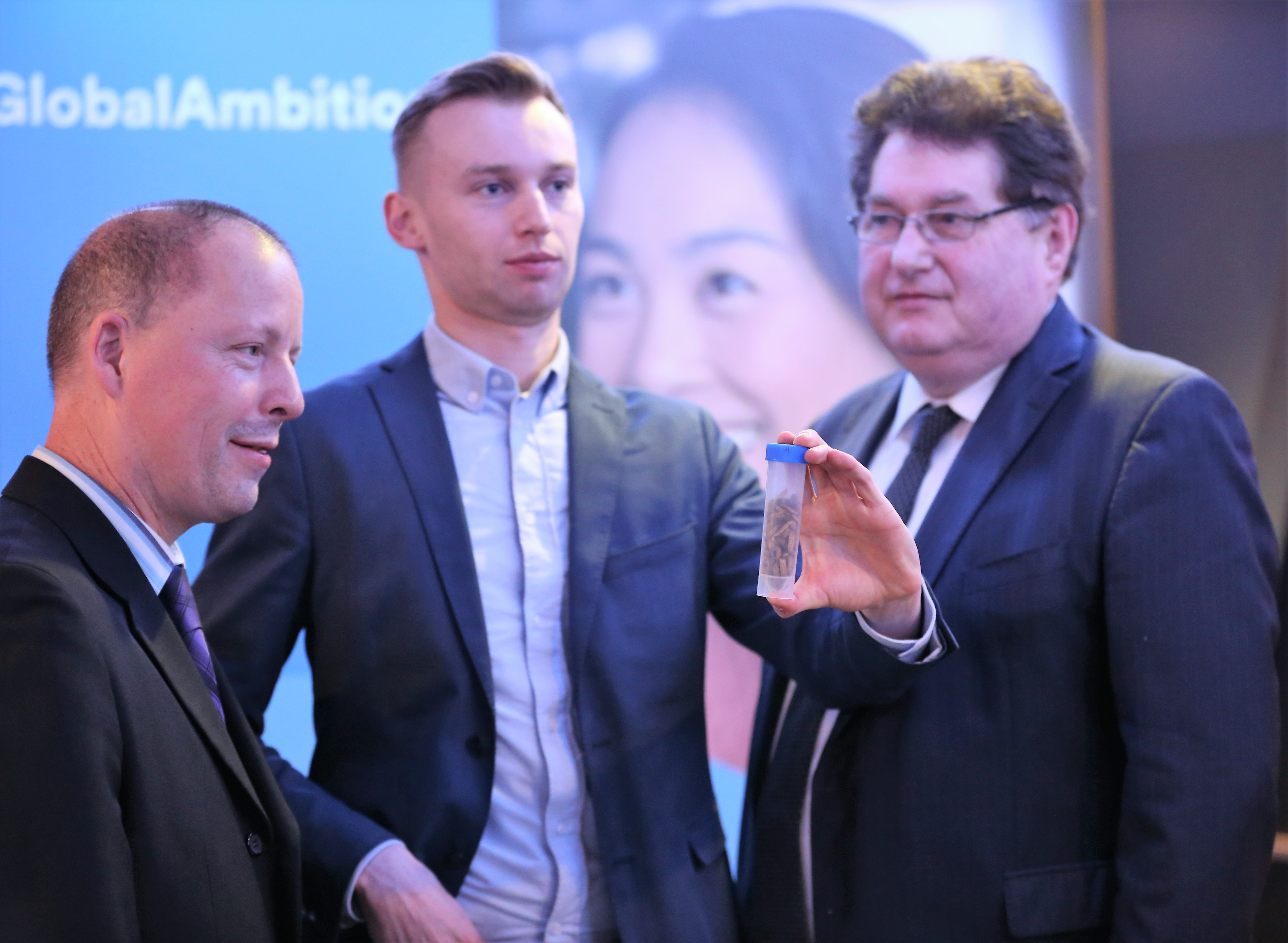 Based out of Ashbourne in Meath, the startup founded by Alvan Hunt and John Lynam is using insects to convert waste materials into ingredients for animal feed – and possibly even food for human consumption.

It’s an idea that could help address the global food shortage and cut greenhouse emissions from food production by 90%, according to Hunt.

“We take in raw material waste and we use insects to bioconvert the waste into sustainable natural commodities,” says Hunt. “We’re producing protein and oil with a tiny footprint compared to what would usually take fields of tillage or oceans of fish.

“We extract the protein into a powder that we sell in bulk, and producers use the raw material for making food pellets and the powder would be the main protein constituent in the pellet.”

Some of the new raw materials Hexafly is producing are insect protein, insect oil and a natural fertiliser called frass.

“They can be used in products for human consumption. There are two countries that have passed approval for the use of insects in food production.

“You can make insect flour or use some of the products as a dairy replacement for people who are lactose intolerant because it is really high in calcium.”

He adds that the insect oil can also be used in the pharma industry as a base for skincare products or even as a cooking oil.

But for now, the business isn’t trying to turn insect protein into the next nutrition fad. Hunt says the startup’s main target customers are large-scale animal feed producers across the agriculture and aquaculture industries.

“It’s actually better for fish because it’s a lot more natural. A lot of fish eat insects, so they are carnivorous animals.

“What they’re eating now is soya, which is a land-based plant. So it’s not natural for a fish and it doesn’t digest as well. We think insect protein is a step closer to nature.”

It’s not the concept of introducing insect protein to the food chain that has been a biggest hurdle so far, according to Hunt. Explaining the complex process behind Hexafly’s production is a much tougher sell.

“Some investors just get it and others you find you have to spend months explaining it to them.

“From the start, we’ve always had the same pitch: this business can be global, it can change the world and transform the agri sector and feed. We can prop up the food supply chain.

“I think if we didn’t have that pitch, we would have gotten nowhere. Nobody would have listened to us.”

Hunt says he has been forced to look abroad for funding due to the lack of dedicated investors for agri-startups locally. However that has introduced the Meath company to the competitive realities of looking for VC money in the US market.

“With the Americans, they might have $5,000 in the bank account and go into an investment meeting and say, ‘In one year we’ll have two million customers on our app and the company will be worth millions’.

“They have the balls to say that and investors like that and get on board. In Ireland, we’ll say, ‘I think it’s a good idea but I’m not sure.’ You kind of hold back on how much potential you think your startup has.”

Hexafly has survived on small, cash prizes from startup competitions and an early $100,000 investment from Cork’s RebelBio accelerator – which is backed by Irish-American investor Sean O’Sullivan.

According to Hunt, the new investment will allow the early-stage company to ramp up production at its new plant in Meath, which is seven times the size of its original base in Kells.

Hexafly recently opened the 15,000 sq ft facility, where insects will be bred and protein extracted as part of a three-week process. The funding will also be used to hire up to 10 new staff.

Hunt adds he is already set on raising more cash so the company can start opening plants overseas.

“If the new factory is a success, we would hope to raise another round next year and will scale up to an even bigger plant in Ireland.

“We want to set up a number of different plants in Ireland, but we also want to take the idea to the UK, Europe, America and Asia, setting up dedicated factories in those regions.”

When talking about international expansion, Hunt says there are competitors abroad they will have to look out for, but he’s not that worried.

“We can have hundreds of competitors worldwide, but they’re not on our radar or in our way at the moment.

“It won’t make a difference because what we aim to replace is so huge. We are looking to replace the entire fish meal and soya industry.”