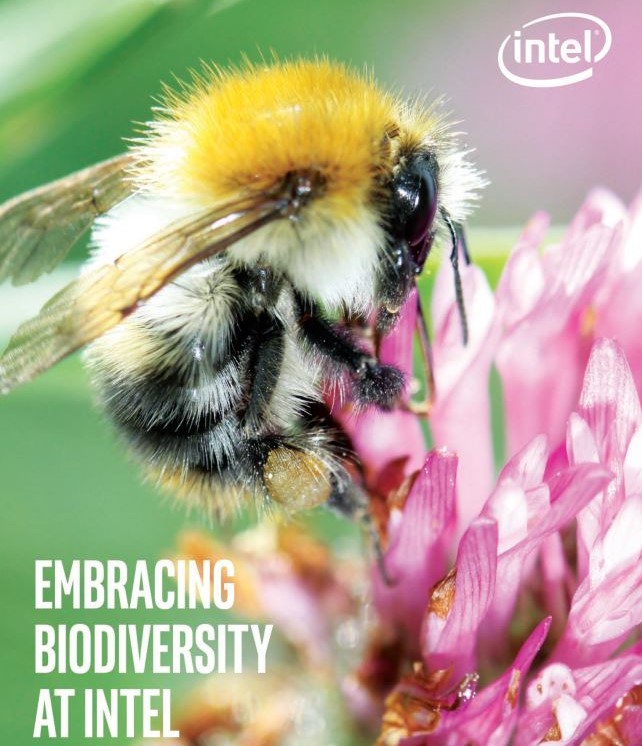 New report  – Embracing Biodiversity at Intel  [pdf 10.7MB]- captures the history of biodiversity protection, enhancement, restoration and habitat creation on the Intel Ireland campus as well as broader environmental engagements and plans for the coming years.

Intel Ireland has a long history of supporting biodiversity and since first arriving at our campus in Leixlip in 1989 we have worked to enhance, restore and create biodiverse habitats and have ensured continual improvement in this area by embedding biodiversity into our Environmental Management System.

2016 in particular marked for Intel Ireland a year of renewed focus on biodiversity both at our Leixlip site and in the local surrounding community. We kicked off a dedicated project which aimed to build on the range of biodiversity protection activities already in place, and to identify additional biodiversity protection measures, many of which had arisen from the achievement of the Business Working Responsibly Mark and from the innovative Biodiversity Framework for Business, both of which were developed by Business in the Community Ireland.

As part of this renewed focus on biodiversity Intel was honoured to last week be unveiled as the first company in Ireland to use Business in the Community Ireland’s innovative Biodiversity Framework to shape our approach to biodiversity management. The Framework aligns a suite of interrelated biodiversity actions to five pillars of responsible and sustainable business – Environment, Community, Marketplace, Governance and Workplace. The framework has helped us to build on our existing work and to articulate a set of actions that can further our biodiversity efforts in the future.

To illustrate this commitment Intel have published a dedicated biodiversity report which outlines the history of biodiversity protection, enhancement, restoration and habitat creation action on the Intel Ireland campus in Kildare as well as broader environmental engagements and plans for the coming years.

Speaking about the launch of the new biodiversity report Intel Ireland General Manager Eamonn Sinnott said; “Intel has a long history of commitment to the environment and this is something that we have demonstrated here in Ireland for over 25 years. The protection and enhancement of Biodiversity here at our Leixlip campus is an important part of this environmental commitment and I am proud to share both our progress to date and plans for the future in this new publication”.

Employees are at the heart of our biodiversity commitment
Intel employees have been an integral part of the company’s biodiversity journey and have volunteered and participated in projects such as restoring the Orchard on site, planting a butterfly bed in the community and supporting our Tidy Towns and schools with additional environmental projects. For years Intel Ireland staff have also volunteered with local schools on environmental initiatives such as can recycling, eco design competitions, the An Taisce green flags for schools initiative, Reduce Our Energy, tree planting and growing vegetable gardens.

Community engagement
In 2015, Intel Ireland initiated the Pride of Place Competition involving partnerships with the Tidy Towns Associations of Leixlip, Celbridge and Maynooth. Each association was invited to submit three proposals for sustainable initiatives that would enhance the environment of their local community while also engaging people on environmental matters. The general public were invited to vote online for their favourite project and the idea which received the most votes received €10,000 funding towards implementing the idea. The company met with the Tidy Towns Committees to support them in devising suitable projects and encouraged them to submit at least one project that promoted the biodiversity of the locality. Some of the winning projects have included the Big Belly Compactor bin installation in Maynooth, the Celbridge naturally project and the recycled benches initiative with Leixlip Scout’s group.

Source: Business in the Community

Presentation of NSAI Awards of Distinction

Presentation of NSAI Awards of Distinction