Greenhouse gas emissions across the European Union decreased modestly in 2016, according to estimates published in the latest climate ‘trends and projections’ assessments released today by the European Environment Agency (EEA). The estimates confirm that the EU remains on track to meet its emission reduction target set for 2020, but more work is needed to meet longer-term goals.

This year’s ‘Trends and Projections in Europe’ package includes an assessment of progress towards the EU’s climate targets, preliminary EU greenhouse gas emissions for the year 2016, and a specific analysis of trends and projections in the EU Emissions Trading System (ETS). The final part of the package, assessing progress on energy targets will be published later this month.

The reports are drafted yearly by the EEA to take stock of the EU’s and Member States’ progress in meeting their climate and energy targets, which includes reducing greenhouse gas emissions by 20 % compared to 1990 levels by 2020.

“The EU is firmly on track to meet its 2020 emissions targets. This evolution illustrates the positive effects of innovation and investments in the low carbon economy of the future. However, it is clear we all need to considerably intensify our efforts if we are to meet our Paris agreement commitments and the more ambitious longer term goals for 2030 and 2050 in creating a low-carbon economy”, said Hans Bruyninckx, EEA Executive Director.

According to preliminary estimates, emissions for 2016 in the EU decreased by 0.7% from 2015. The slight drop corresponds to a 23% decrease in emissions between 1990 and 2016. The decrease in 2016 was mainly due to a rising share of renewable energy and a switch from coal to gas in the EU’s fuel mix for power generation, despite an increase in energy consumption and growth in emissions in the residential and transport sectors. These factors are reflected in the changes in emissions under the EU ETS and under the Effort Sharing Decision.

In the EU ETS, which covers large industrial facilities and intra-EU flights, emissions declined by 2.6 % between 2015 and 2016. This reduction was mostly driven by emission cuts in large power plants, which reflects factors including the phasing out of coal use in several Member States. Emissions from airline operators, which account for 3 % of the total emissions covered by the EU ETS, increased compared with the previous year (up 7.6 %), as the number of passengers continued to grow. Altogether, emissions from industrial installations under the EU ETS stand now 26 % below 2005 levels.

In the other sectors (such as transport, buildings, agriculture and waste), for which Member States have annual emissions targets at national level under the Effort Sharing Decision, preliminary estimates indicate that emissions aggregated at EU level increased by 0.9 % in 2016. A higher demand for heating (because of weather conditions) and a higher transport demand in 2016 help explain the increase. Emissions from these sectors are now 11% below 2005 levels.

Most Member States meeting their targets

Latest projections from Member States show that, while emissions from the EU as a whole will remain below the 2020 target, the situation differs between Member States. Twenty-one EU Member States expect to keep or reduce their emissions below their national targets by 2020. However, Austria, Belgium, Finland, Germany, Ireland, Luxembourg and Malta need to enhance their efforts immediately to meet their 2020 targets.

Updated projections also show that current efforts need to be stepped up to achieve more ambitious longer term objectives. As already stated in previous assessments, the pace of reductions in emissions beyond 2020 is expected to slow down under current policies, falling short of the 40% reduction target for 2030. Discussions are ongoing in the EU to adopt a new package of legislation on climate and energy to achieve this goal, together with those set out under the Energy Union.

Similarly, efforts to meet longer-term 2050 objectives on decarbonisation will also require a considerable intensification of efforts, and include a major transformation of Europe’s energy, food and mobility sectors.

Greenhouse gas emission trends, projections and targets in the EU, 1990-2050 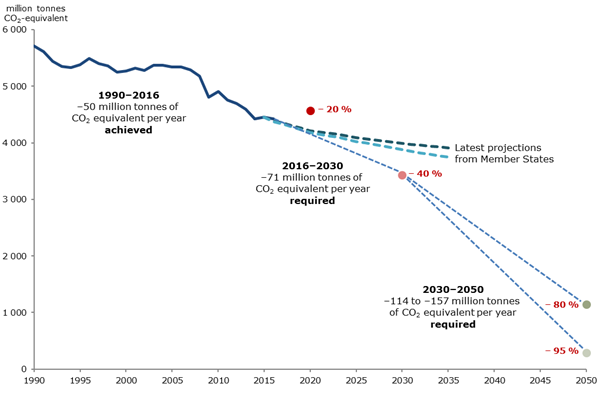 Deposit-return systems are a proven tool to recover beverage containers for reuse and high-quality recycling.

Deposit-return systems are a proven tool to recover beverage containers for reuse and high-quality recycling.