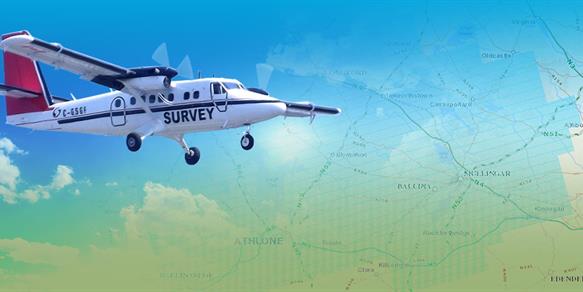 Data from the latest phases of the Tellus airborne geophysical survey were released at an event at Ionad Cultúrtha an Phiarsaigh, Conamara – Pearse Cultural Centre Rosmuc, in Co. Galway. Tellus, managed by Geological Survey Ireland and funded by the Department of Communications, Climate Action and Environment, was flown over counties Donegal and Mayo for five months in 2017 using a specialist aircraft with sensitive instrumentation on board. Millions of individual measurements were collected and are now being used to map fine variations in the rocks and soils of the northwest of Ireland, even in areas where the rocks are buried beneath thick layers of sediment, water, or bog.

Speaking at the launch of the new data, Minister for Natural Resources Seán Kyne TD said: “I am delighted to officially release the latest phase of Tellus data and to see the reach of the Tellus surveys continue to expand. The data collected provide important information to the mineral, agricultural and environmental sectors and also feed into the daily work of Geological Survey Ireland, including carrying out Geological Heritage Audits of County Geological Sites. These geological heritage audits contribute to effective planning and to the development and promotion of tourism in the region, particularly in rural areas, for instance the aspiring geopark of Joyce Country and the Western Lakes. The Tellus data provide a new level of detail that allows us to understand Ireland’s geological formation and natural resources. I look forward to the next phases of the Tellus survey as it moves southward, and to the benefits it brings to these new survey areas and to Ireland as it provides the baseline information important to the National Development Plan 2018-2027 and the National Planning Framework.’’

The new data have given Geological Survey Ireland scientists a fresh look at how Ireland is assembled from blocks of ancient continents over hundreds of millions of years. Patterns produced by differences in magnetic properties of rocks, and imaged from the aircraft, are identified and can be mapped in areas covered by layers of sediment, bog or water. This is not possible using traditional mapping methods and is one of the significant advantages of the Tellus survey. Features include possible extension of areas of mineralisation and geological faults that can be traced across national boundaries. These new insights have been joined with data from previous Tellus surveys and will help in the understanding of how Ireland formed over its 1.8 billion year history.

A comprehensive outreach campaign was run throughout the survey to ensure key land and animal owners in both Mayo and Donegal were informed of the aircraft’s movements and its purpose. The survey was completed on schedule and the data collected are now available to download or view from the www.gsi.ie/tellus website. The Tellus airborne geophysical survey has now mapped 50% of the country and the new data plus previous phases of data are all available publicly, free of charge.

For 2018, plans are underway which will see the Tellus aircraft extend its surveying activities into counties Limerick and Tipperary as well as west Cork in late spring / early summer.

Koen Verbruggen, Director of Geological Survey Ireland commented “We’re pleased to have successfully completed the latest phase of Tellus surveying and the high-quality geoscience information is vital to the work carried out by the Geological Survey as well as wider stakeholders in areas of radon prevention, groundwater supplies, mineral exploration and agriculture.”

Previous phases of Tellus have prompted significant interest in mineral exploration and the data are also being used to assist radon risk maps, geological mapping and soil classification.